Choir Rehearsals
Choir rehearsals are held as needed in the choir loft, either weekday evenings or Sundays before Church. If you would like to join the choir, please contact the choir director or come to one of the rehearsals listed here.

A warm and welcoming invitation to all Saint George parishioners to join our choir. Come, offer your talents in worship, praise, and thanksgiving to God with the faithful on Sundays.  Offer the gift of voice, the most natural, precious and beautiful instrument of all, not made by human hands.  You will find the choir a rewarding and inspirational ministry as you learn the Divine Liturgy and build beautiful and lasting relationships.  Many people are intimidated by the size of our congregation and wonder how they can quickly become a part of the community. One way is to join the choir, a dedicated group of people singing the beautiful hymns of the Orthodox Liturgy. 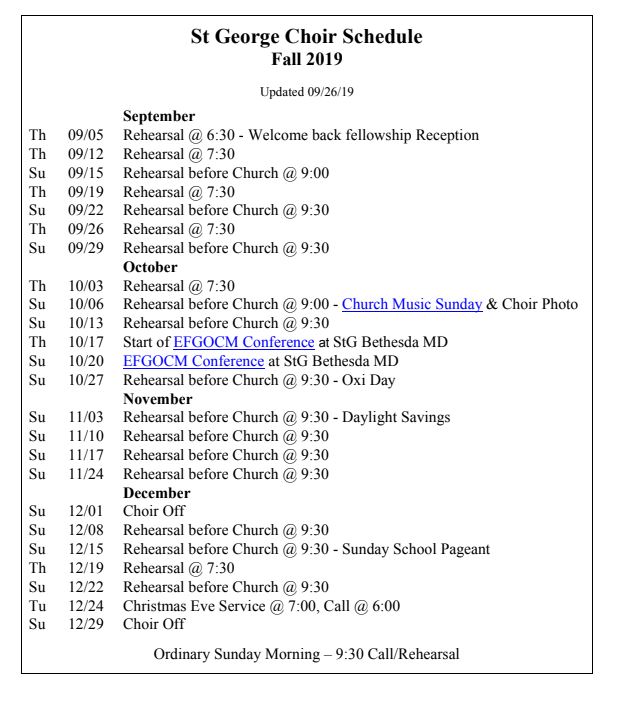 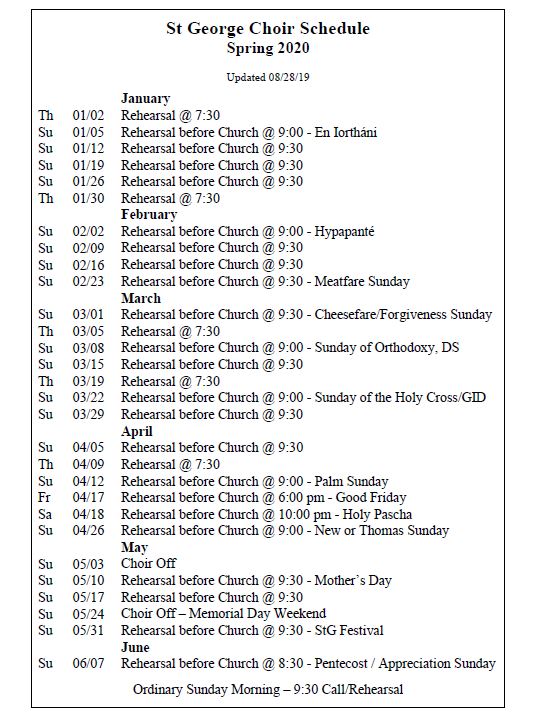 Who We Are
The Choir was organized in 1967 with the establishment of the Saint George Parish. The first Choir Director was George Seymore who directed until 1976. He was succeeded by Tassos Vrenios who directed until he retired in 2005. Teddy Dwight became Choir Director in 2005 and Paul Mavromihalis in 2008. The choir is active in the Metropolis and the Archdiocese through current membership in the Eastern Federation of Greek Orthodox Church Musicians and the National Forum of Greek Orthodox Church Musicians.

What We Do
In addition to singing the responses and hymns for Liturgies, Lent, and Holy Week; the Choir also participates in the Christmas Pageant and other special occasions.  The Choir has participated at Patriarchal Ecumenical Services and Metropolis Choir Conferences.

During the 1990 Clergy Laity Congress, the Choir was selected to provide the Liturgical music for the Ecumenical Service held at the Lincoln Memorial.  In 1994 the Choir performed in concert at the newly dedicated Grand Hall with a program that included Greek folk songs, operatic arias, and Broadway musical tunes. In 1997 the Choir provided the liturgical music for the Patriarchal Ecumenical Service held at the National Cathedral where over 3,000 attended to honor Patriarch Bartholomew. Additional concerts included the Kennedy Center Terrace Theater Concert series and the American University Concert series featuring programs of Orthodox liturgical hymns and Greek folk songs.  In 1988 the Choir sang at the services for the Enthronement of our Bishop George of Komanon and the Consecration of our Church of Saint George.

The Sacred Music of the Church –