FEAST OF ST. JOHN THE SILENT 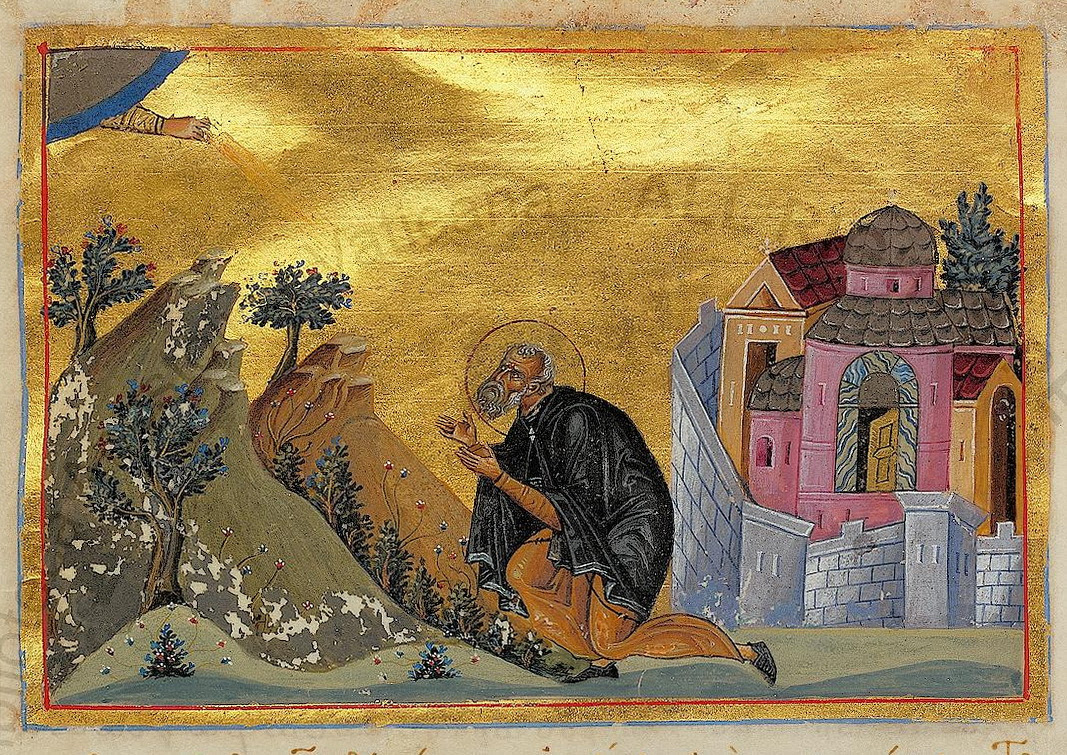 St. John was born in the year 454 (according to J.Patrich, January 8,454). He was born in the city of Nicopolis, in Armenia to parents Enkratius and Euphemia, his father Enkratius was a military commander. John loved prayer and solitude, he also had a passion for reading Holy Scripture.

When his parents died he used the inheritance they left him to build a church dedicated to the Most Holy Theotokos. At the age of eighteen he became a monk and began living a strict and resolute life of asceticism, cleansing his heart by his many tears, fasting and prayer and temperance at the church he founded. He lived with ten other young monks, founding a coenobium. All worked physically hard throughout the day, alongside their life of prayer.

When John was twenty eight year old, the people of Colonia requested the Metropolitan of Sebaste to make John their bishop. After his consecration, John continued his strict ascetic life style and influenced his relatives that included his brother Pergamios, an associate of the emperors Zeno and Anastasius, and his nephew Theodore, an associate of the emperor Justinian, to also live as Christians should.

His austere life during this period was influenced by the asceticism of the monks of Syria, Armenia’s neighbor to the south. He refrained from washing himself, so that he would neither display nor see his naked body, thinking that abstinence from washing was one of the greatest virtues. He greatly engaged in fasts and prayers, acted modestly regarding all the demands of the body, and avoided evil thoughts.

Nine years after becoming bishop, his brother-in-law Pasinicus was appointed Governor of the province, and began to trouble the Church over which John presided. He attempted to limit the authority of Church officials, and violated the asylum right of the church precinct, forcibly removing those who sought refuge therein. This situation worsened after the death of John’s sister, Maria.

Eventually, John decided to go to Constantinople, to seek help there on behalf of his church. After he had settled all the affairs of his church, with the help of Euphemius, the Patriarch of Constantinople, he decided to retire to the holy city of Jerusalem where he would live as an anchorite, far from the troubles and evils of the world.

He dismissed the priests and officials in his entourage, giving them the orders he had received from the Emperor, and secretly boarded a ship, sailing for the Holy Land. He arrived in Jerusalem and stayed in the hospice for the old founded by Eudocia outside the Holy City. In this home, which also served as a hostel for the poor and pilgrims, there was a prayer house in honour of the Martyr St. George. After abiding there for some time, a divine revelation led him to the lavra of Savas.

Hiding his episcopal rank, John was accepted into the community as a simple novice. For the next four years John worked obediently at every task he was assigned under the guidance of igumen St. Savas (head of the monastery, similar to an Abbot). When a guesthouse was built at the Lavra, John served the workers their food and assisted in the construction of the building. He again helped the workers when a cenobitic monastery for novices was built.

But, when St. Savas found John worthy of ordination to presbyter, John was forced to reveal his rank to Patriarch Elias of Jerusalem. By order of the Patriarch, from then on John was permitted to live as a recluse in his cell, he did not attend church and did not come into contact with anybody, except for his attendant. Only on the day of the consecration of the great church of the lavra, dedicated to the Theotokos, to which the Patriarch Elias also came, was John compelled to leave his cell to greet the Patriarch.

John also fled the rebellious community and went forth to the wilderness of Rouba, where he lived in seclusion in a cave for six years, living an extremely ascetic life. Only once every two-three days did he obtain nourishment from melagria, a wild plant consumed by the anchorites, which he would gather with his hoe.

But even in this remote location, he did not exist solely on melagria. Once, before Easter, the old man was visited by someone he did not know, who came with a donkey loaded with loaves of fresh white bread, and other provisions: wine, oil, fresh cheeses, eggs, and a jar of honey. The stranger unloaded the animal and left. John regarded this as an act of Divine Providence.

The new king of the Persians Almandurus raided Arabia and Palestine. This raids incurred on the area in which St. John lived. Surviving a devastating incursion of Saracens only because the Lord sent him a defender: a ferocious lion. When the Saracens tried to harm John, the lion attacked them and scattered them in fright.

After Savas returned to the lavra from his second voluntary exile to Nicopolis (end of 506), establishing the New Laura (507), and starting to build the Monastery of the Cave, he went to John in his cave at Rouba, and persuaded him to return to his cell in the lavra in 509, when John was 56 years old. Back in the lavra, John lived as a hesychast (recluse) in his cell for 48 years, until his death in 559.

When St John reached age seventy, his holy and God-bearing spiritual Father St Sava died. The saint grieved deeply over this, since he was not present at the time. St Sava appeared to him in a vision, and having consoled him, he foretold that there would be much toil ahead in the struggle against heresy. St John even had to leave his solitude to strengthen the brethren in the struggle with the Origenists, for seven months, this was the only interruption to the 48 years of isolation endured by St. John.

by his untiring prayer and humble wisdom, St John acquired the grace of the Holy Spirit. At his prayers, many miracles took place, and he was able to discern the secret thoughts of people. He healed the sick and those possessed by demons. Even during his lifetime he saved those who invoked his name from certain destruction. Once, he scattered fig seeds on barren rock, and a beautiful and fruitful tree sprang up. In time, the tree grew so much that it overshadowed the saint’s cell.

Great in humility, might and divine wisdom, this servant of God entered peacefully into rest in the year 558 at the age of 104.

APOLYTIKION
By a flood of tears you made the desert fertile, / and your longing for God brought forth fruits in abundance. / By the radiance of miracles you illumined the whole universe! / O our holy father John, pray to Christ our God to save our souls!