FEAST OF THE HOLY PROPHET HABAKKUK 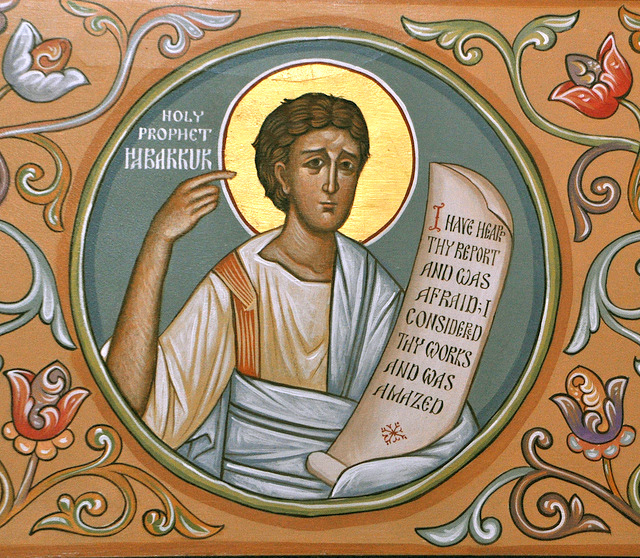 The Holy Prophet Habakkuk, the eighth of the Twelve Minor Prophets, was descended from the Tribe of Simeon, and he prophesied around 650 B.C.

The Prophet Habakkuk foresaw the destruction of the Jerusalem Temple, the Babylonian Captivity and the later return of the captives to their native land. During the war with the Babylonians the prophet withdrew to Arabia, where the following miracle occurred. When he was bringing dinner to the reapers, he met an angel of the Lord, and instantly by the strength of his spirit he was transported to Babylon, where at the time the Prophet Daniel was languishing in prison. The food intended for the reapers assuaged the hunger of the exhausted Prophet Daniel (Dan. 14:33-37).

After the end of the war with the Babylonians, the Prophet Habakkuk returned to his homeland and died at a great old age. His relics were found at the time of Emperor Theodosius the Younger (408-450), together with the relics of the Prophet Micah (August 14).

We celebrate the memory / of Your prophet Habakkuk, O Lord; / through him we entreat You, / save our souls.

Divinely eloquent Habakkuk, / you announced to the world the coming forth of God from the south, from the Virgin. / Standing on the divine watch, you received a report from the radiant angel: / “You proclaimed the Resurrection of Christ to the world!” / Therefore in gladness we cry out to you: / “Rejoice, splendid adornment of the prophets!”