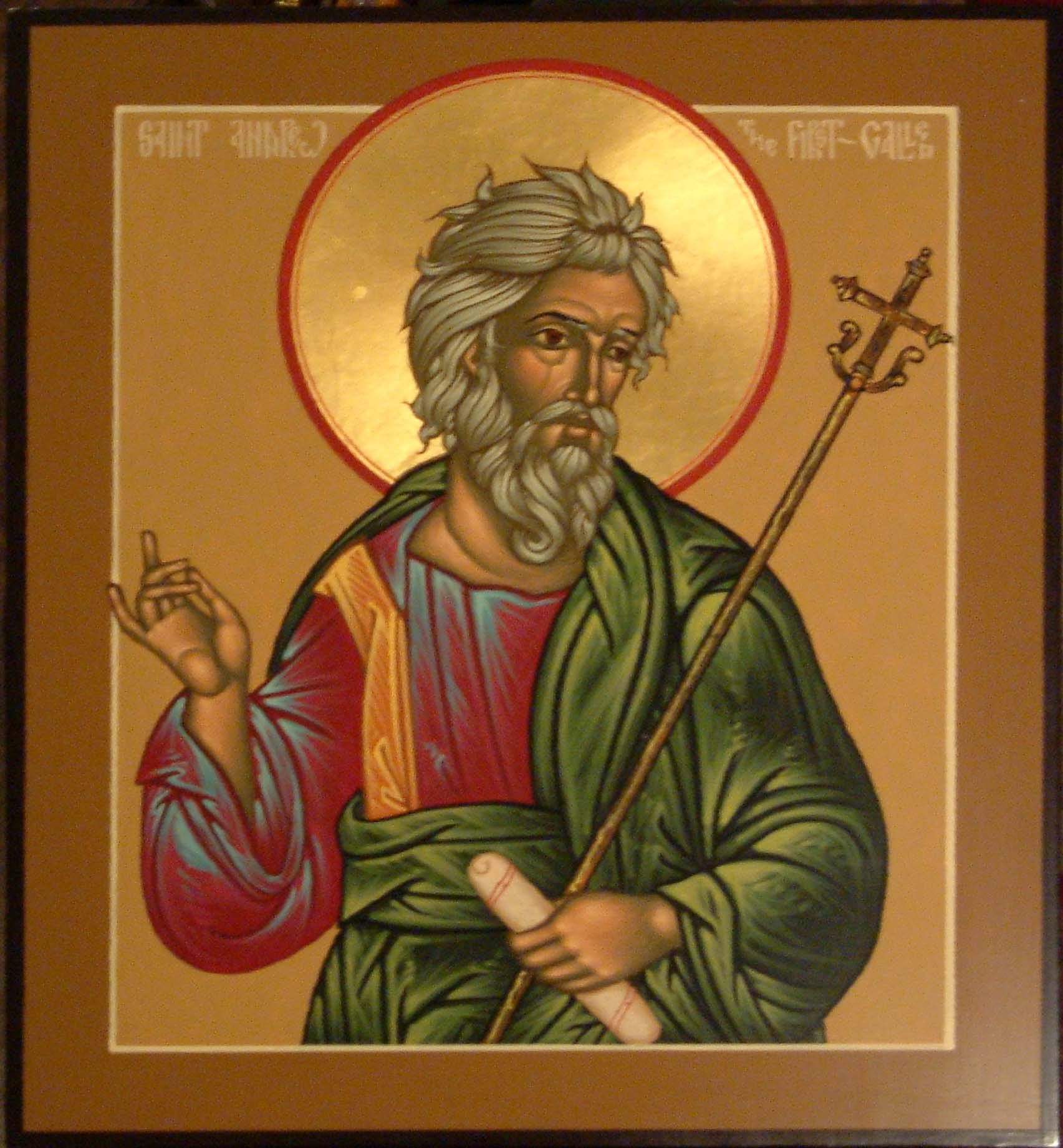 The Holy Apostle Andrew the First-Called was the first of the Apostles to follow Christ, and he later brought his own brother, the holy Apostle Peter, to Christ (John 1:35-42). The future apostle was from Bethsaida, and from his youth he turned with all his soul to God. He did not enter into marriage, and he worked with his brother as a fisherman.

When the holy Prophet, Forerunner and Baptist John began to preach, Saint Andrew became his closest disciple. Declaring Christ to be the Lamb of God, Saint John the Baptist himself sent to Christ his own two disciples, the future Apostles Andrew and John the Theologian.
After the Descent of the Holy Spirit upon the Apostles, Saint Andrew went to the Eastern lands preaching the Word of God. He went through Asia Minor, Thrace, Macedonia, he reached the River Danube, went along the coast of the Black Sea, through Crimea, the Black Sea region and along the River Dniepr he climbed to the place where the city of Kiev now stands.
He stopped overnight on the hills of Kiev. Rising in the morning, he said to those disciples that were with him: “See these hills? Upon these hills shall shine forth the beneficence of God, and there will be a great city here, and God shall raise up many churches.” The apostle went up around the hills, blessed them and set up a cross. Having prayed, he went up even further along the Dniepr and reached a settlement of the Slavs, where Novgorod was built. From here the apostle went through the land of the Varangians towards Rome for preaching, and again he returned to Thrace, where in the small village of Byzantium, the future Constantinople, he founded the Church of Christ.

The name of the holy Apostle Andrew links the mother, the Church of Constantinople, with her daughter, the Russian Church. On his journeys the First-Called Apostle endured many sufferings and torments from pagans: they cast him out of their cities and they beat him. In Sinope they pelted him with stones, but remaining unharmed, the persistent disciple of Christ continued to preach to people about the Savior.

through the prayers of the Apostle, the Lord worked miracles. By the labors of the holy Apostle Andrew, Christian Churches were established, for which he provided bishops and clergy. The final city to which the Apostle came was the city of Patra, where he was destined to suffer martyrdom.
The Lord worked many miracles through His disciple in Patra. The infirm were made whole, and the blind received their sight. Through the prayers of the Apostle, the illustrious citizen Sosios recovered from serious illness and Maximilla and Stratokles, the wife and brother of the governor of Patra, were healed. The miracles accomplished by the Apostle and his fiery speech enlightened almost all the citizens of the city of Patra with the true Faith.
Few pagans remained at Patra, but among them was the prefect of the city, Aegeatos. The Apostle Andrew repeatedly turned to him with the words of the Gospel. But even the miracles of the Apostle did not convince Aegeatos. The holy Apostle with love and humility appealed to his soul, striving to reveal to him the Christian mystery of life eternal, through the wonderworking power of the Holy Cross of the Lord.

The angry Aegeatos gave orders to crucify the apostle. The pagan thought he might undo Saint Andrew’s preaching if he were to put him to death on the cross.
Saint Andrew the First-Called accepted the decision of the prefect with joy and with prayer to the Lord, and went willingly to the place of execution. In order to prolong the suffering of the saint, Aegeatos gave orders not to nail the saint’s hands and feet, but to tie them to the cross. For two days the apostle taught the citizens who gathered about. The people, in listening to him, with all their souls pitied him and tried to take Saint Andrew down from the cross. Fearing a riot of the people, Aegeatos gave orders to stop the execution. But the holy apostle began to pray that the Lord would grant him death on the cross.

Just as the soldiers tried to take hold of the Apostle Andrew, they lost control of their hands. The crucified apostle, having given glory to God, said: “Lord Jesus Christ, receive my spirit.” Then a blazing ray of divine light illumined the cross and the martyr crucified upon it. When the light faded, the holy Apostle Andrew had already given up his holy soul to the Lord. Maximilla, the wife of the prefect, had the body of the saint taken down from the cross, and buried him with honor.

A few centuries later, under the emperor Constantine the Great, the relics of the holy Apostle Andrew were solemnly transferred to Constantinople and placed in the church of the Holy Apostles beside the relics of the holy Evangelist Luke and Saint Paul’s disciple Saint Timothy.
APOLYTIKION
Andrew, first-called of the Apostles / and brother of the foremost disciple, / entreat the Master of all / to grant peace to the world / and to our souls great mercy.

Let us praise Andrew, the herald of God, / the namesake of courage, / the first-called of the Savior’s disciples / and the brother of Peter. / As he once called to his brother, he now cries out to us: / “Come, for we have found the One whom the world desires!”