FEAST OF THE HOLY PROPHET OBADIAH 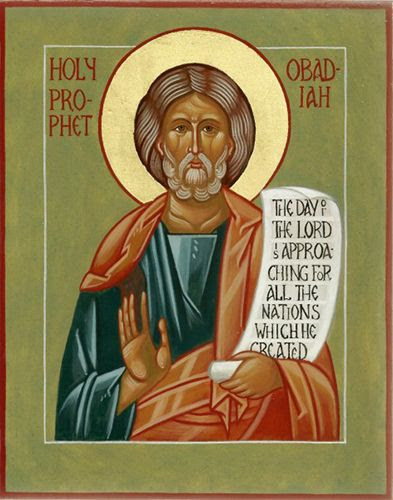 The holy Prophet Obadiah [or Abdia] is the fourth of the Twelve Minor Prophets, and he lived during the ninth century B.C. He was from the village of Betharam, near Sichem, and he served as steward of the impious Israelite King Ahab. In those days the whole of Israel had turned away from the true God and had begun to offer sacrifice to Baal, but Obadiah faithfully served the God of Abraham, Isaac and Jacob in secret.

When Ahab’s wife, the impious and dissolute Jezebel, hunted down all the prophets of the Lord (because of her quarrel with the Prophet Elias), Obadiah gave them shelter and food (3/1 Kgs 18:3 ff). Ahab’s successor King Okhoziah [Ahaziah] sent three detachments of soldiers to arrest the holy Prophet Elias (July 20). One of these detachments was headed by the holy Prophet Obadiah. Through the prayer of the Prophet Elias, two of the detachments were consumed by heavenly fire, but Obadiah and his detachment were spared by the Lord (4/2 Kgs 1).
From that moment Obadiah resigned from military service and became a follower of the Prophet Elias. Afterward, he himself received the gift of prophecy. The God-inspired work of the Prophet Obadiah is the fourth of the Books of the Twelve Minor Prophets in the Bible, and contains predictions about the future salvation of the Gentiles (Vs. 15) and that the Savior would come forth from Sion (Vs. 17). The holy Prophet Obadiah, whose name means servant (or worshipper) of the Lord, was buried in Samaria.
In iconography, the Prophet Obadiah is depicted as a grey-haired old man with a rounded beard. His scroll reads: “In that day, saith the Lord, I shall destroy the wise men out of Idumea.”(Obadiah 8).

We celebrate the memory / of Your prophet Obadiah, O Lord; / through him we entreat You, / save our souls.

The great Obadiah, acquiring a mind luminous with divine splendor, / speaks through the Holy Spirit, proclaiming things to come. / Today we honor him with faithful minds, / celebrating his holy memory which enlightens the hearts of men.