FEAST OF ST. CECILIA OF ROME 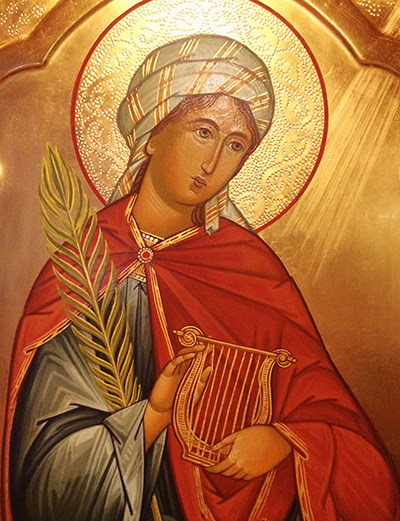 Our Icon of Saint Cecilia – Our Lady of the Mountains, Jasper, GA

St. Cecilia was born in Rome of wealthy and illustrious parents. From her youth, she was raised in the Christian Faith. She prayed fervently and helped those in need.

Though she had vowed to preserve her virginity for Christ, her parents decided to give her in marriage to the noble pagan Valerian.

Cecilia did not oppose her parents, but tearfully prayed to God that her betrothed would believe in Christ, and that He would send an angel to preserve her virginity.
On the night of their marriage, Cecilia told her husband that an angel stood by to guard her. She warned him that he would be slain if he touched her. Valerian asked to see this angel, but his bride told him that he could not see the angel until he had been cleansed of his unbelief. He asked, “How may I be cleansed?” She said that if Valerian asked Bishop Urban for Baptism, he would be able to see the angel. Cecilia persuaded her fiancé to go with her to Bishop Urban, who was hiding in a cave because of the persecution of Christians.

The instructions of the wise bishop permeated the soul of Valerian, and both he and his brother Tiburtius were converted to Christianity. The brothers distributed a portion of their inheritance to the poor, cared for the sick, and buried Christians that had been tortured to death.
Governor Almachius, having learned of their conversion, gave orders to arrest the brothers and bring them to trial. He demanded that they renounce Christ and offer sacrifice to the pagan gods, but the brothers refused. They were then beaten. Under torture, Valerian urged his fellow Christians not to be afraid of torments, but to stand firm for Christ.

The governor, wanting to prevent Valerian from influencing the people, ordered that the martyrs be taken outside the city limits and executed there. The soldiers accompanying the martyrs were commanded by Maximus. He was amazed at the courage of the saints, and asked them why they did not fear death. The holy brothers answered that they were relinquishing this temporal life for life eternal. Maximus asked to learn about Christianity in detail, so he took Valerian and Tiburtius to his home and spoke with them throughout the night. When she heard of this, St. Cecilia took a priest with her to see Maximus, and he with all his family accepted holy Baptism.
On the following day upon the beheading of Valerian and Tiburtius, St. Maximus confessed before everyone that he saw how their holy souls had gone up to Heaven. For this confession, Maximus was scourged to death with whips.

The governor wanted to confiscate the property of the saints, but when he was told that St. Cecilia had already distributed all her remaining wealth to the poor and had converted 400 men, he ordered her execution. For three days, she was tortured with fire and smoke in a red-hot bathhouse, but the grace of God sustained her. It was then ordered that she be beheaded, but the executioner – after striking her three times with a sword – only wounded her.
St. Cecilia lived three more days in full consciousness, encouraging those around her, and died with prayer on her lips.

n the radiance of your divine way of life, / you were drawn toward everlasting life, attracting a pair of brothers as well. / In harmony with them, Cecilia, you struggled and became worthy of divine glory. / With them, intercede that those who praise you / may be granted pardon of their transgressions and great mercy.

Let us, the plenitude of the faithful, / sing hymns to her who was freely espoused to Christ, / and adorned her heart with virtues befitting God. / Then, shining like the sun, / she vanquished the boldness of Almachius in the midst of those who sought her. / After these things, she was seen by those on earth / as a divine foundation, strengthening their faith.